Most Families Forced Out For Less Than $2,500 Back Rent 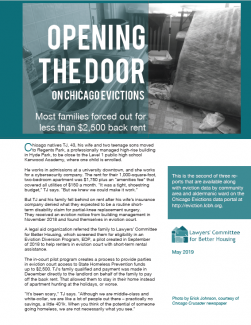 Report File
Most Families Forced Out For Less Than $2,500 Back Rent - Download the full report.1.83 MB

This is the second of three reports in the Opening the Door on Chicago Evictions series.

Almost two thirds of the eviction cases claiming back rent were for relatively small amounts of money. In 18% of those cases, the amount owed was less than $1,000, and an additional 44% were for less than $2,500.

Eviction case filings do not distinguish between tenants who could not pay their rent and those who legally withheld their rent (for repairs or other allowed reasons). This distinction may only come to light if tenants are able to assert their rights in court.

The remaining 18% of cases filed were for eviction only and did not make claims for back rent. Eviction only cases are normally filed for non-rent related reasons, such as alleged lease infractions or that tenants stayed beyond the end of their lease term, though some landlords who are owed back rent forego their claim and choose to sue for eviction only.

Unfortunately, online court records don’t provide the specific reason for the eviction filing. Beyond the existence of a rent claim or not, the court data provide little help for a deeper look into the reasons for eviction.

Illinois should increase State Homeless Prevention funding so that renters who are in need of assistance and are eligible can access these funds through various rental assistance programs, including the Eviction Diversion Program, throughout the entire fiscal year. State Homeless Prevention funds should be directed to the areas with higher eviction filing rates. Chicago should shore-up emergency rental assistance program funding as needed.

Chicago should allocate more resources to affordable housing than currently envisioned. According to Chicago’s recently adopted five-year housing plan, the citywide deficit in affordable rental units is more than 119,000, yet the plan addresses only a quarter of the need, providing for the production (or preservation) of less than 28,000 units.12

Illinois should lift the ban on rent control and repeal the Rent Control Preemption Act of 1997. The law is overly broad and has been used to challenge Chicago’s Keep Chicago Renting Ordinance. Honest debate on any form of rent stabilization for Chicago is impossible while this ban exists. LCBH has no position on any specific proposal for Chicago, but does believe it’s time to let the people talk.