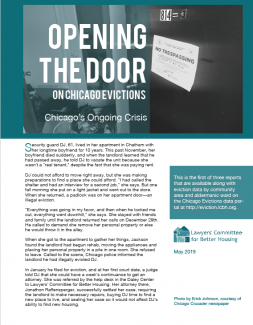 This is the first of three reports in the Opening the Door on Chicago Evictions series.

Between 2010 and 2017, Chicago saw an average of more than 23,000 eviction filings per year, or just over 3.9 eviction filings per 100 rental units. Put in human terms, about 1 in 25 Chicago renters and their families faced eviction each year. In the last two years (2016-2017), eviction filings have decreased by about 20%, a decline partially attributable to the drop in foreclosure-related evictions stemming from the subprime mortgage crisis.

About 60% of cases ended in eviction orders. An eviction order allows the landlord to have the tenant forcibly removed by the sheriff if the tenant has not moved out by a specified date. The data show little year-over-year fluctuation from this average rate of 60% in cases ending in eviction orders, even with the recent declines in eviction filings. Small differences though were present across Chicago’s Community Areas.

The recently launched Regional Assessment of Fair Housing process, which includes Cook County and the city of Chicago, should include as part of its analysis a review of eviction as an impediment to fair housing. Appropriate actions should be proposed to overcome the effects based on race, gender, and familial status in order to Affirmatively Further Fair Housing (AFFH).

Resources should be marshalled to areas where eviction filings are higher than the citywide average to prevent evictions. Community-based programs should be funded to intervene earlier in landlord-tenant disputes prior to an eviction filing to educate tenants on their rights and responsibilities, assist with the creation of tenant unions, and empower tenants to communicate with landlords about conditions and other problems to avoid eviction.

Chicago laws, such as a Proactive Rental Inspection (PRI) and Just Cause or Good Cause for Eviction Ordinance should be implemented to prevent evictions. Chicago should implement a Proactive Rental Inspection (PRI) approach rather than the complaint-driven one currently employed. This would insure safe and habitable rental units for all of Chicago’s renters, and reduce evictions by not requiring tenants to risk retaliation when complaining to the city about conditions problems. Conditions and maintenance issues are often at the root of landlord-tenant disputes. This ordinance would prevent unwarranted, no-fault evictions against tenants that are current on their rent and have not committed any serious lease violations and, thereby, engender in landlords and tenants a long-term interest in the well-being of their neighborhoods.

Eviction cases should only become available to the public after they result in an eviction order or other judgment against the tenant. As discussed in LCBH’s report with Housing Action Illinois, Prejudged, the state should amend the Illinois Eviction Act to seal eviction case records at the point of filing. Such a law would protect tenants whose cases could eventually be sealed from ever having the case appear in the public record or who are being evicted through no fault of their own.